It is an inherent problem nowadays that not everyone gets treated the same way, in society, and in culture. This problem has very often been applied to women, who are constantly demanding to be paid and treated equally. One of these cases are apparent recently, when the women’s national soccer team (USA) has filed a wage-discrimination act against FIFA(Das). It has recently come up that the women’s team, despite winning the world cup, was not paid even close to what men get paid(Carlisle). They get paid about 11 times less (Forbes) which is absolutely absurd. The men’s national team only made it to the first stage of the knockout round, where they lost to Belgium in the 2014 world cup. It’s not only the team that gets underpaid, but individual players as well.

There is no reasonable justification for the inequality shown between men and women. Women get paid 11 times less than men, yet women are considered far more talented in the United States. People are continuously urging FIFA to realize that women are just as loved as men. This is proven, when in the Canadian World Cup, almost every single women’s world cup game was sold out (Forbes), but almost no jerseys or advertisements about the women’s world cup were to be found. Some might say that Revenue is a major role in the paygrades of the two teams. They may say that Men’s soccer is watched way more world wide, and that when people watch Men’s soccer, the sponsors they have and the revenue that they bring in is much more compared to that of the women’s national USA soccer team. But saying that Men bring in more revenue and money than women do is very false. ESPN.GO says that “despite the women's team generating nearly $20 million more dollars in revenue last year than the U.S. men's team, the women are paid about a quarter of what the men earn(Bowen).”

Some Facts to think about.

As you can see in the graph, women get paid much less per game than men do, despite their recent success in the world cup. 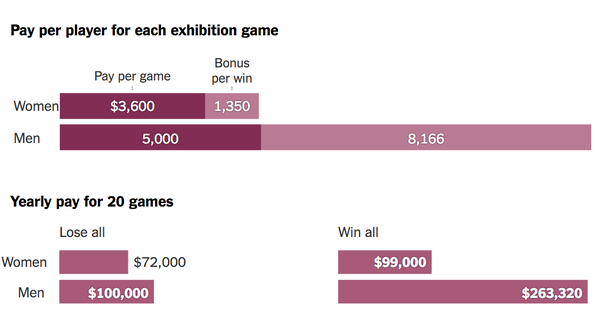 According to ESPN.GO, men and women also have very different weekly wages. For instance, on the United States national teams, the average male's weekly wage is 60,000 dollars, while the average women's is a mere 6,000 dollars (Fagan).

Also, according to the graph below, even their per diems vary drastically. Every little discrepancy is taken into account by FIFA, and it's obvious that they are trying to suppress women of their equality. It's not only the compensation that portrays the inequality FIFA shows to women. It's also the playing conditions. Unlike men who play on smooth grass, women are forced to play on dangerous and rough turf, which leaves them succeptible to many injuries and burns, as shown in the tweet posted by Sydney leroux(Goff).

This is why soccer should be played on grass! pic.twitter.com/fsNGi27oRY

The main argument for the women's team is their fanbase and success. So to have found much more succes than the men's team had, and still get paid infinitely times less, to them is absurd. True, viewership may have something to do with it, but if that were the case, women would still get paid much more than men, because the Women's world cup final (which the USA was in) was the most watched sports event in United States history. (Sandomir) 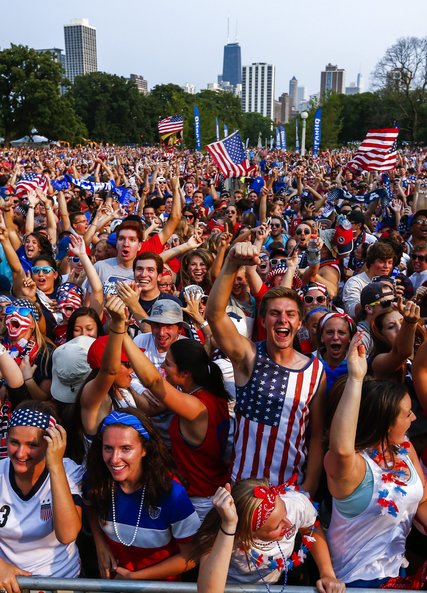 "Fans in Chicago celebrate after the United States scored its third goal" in the Women's World Cup Final(Sandomir).